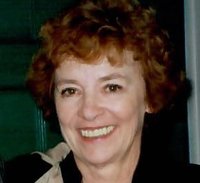 Dixie Friscia Banks died on February 5, 2020, due to a stroke. She was born Dixie Louise Bader on August 30, 1934, in Little Falls, New York, to Hildegarde Youker and George B. Bader, Jr. She was a proud descendant on her mother’s side of an old American family of English Anglicans who came to the colonies in 1656. She lived in her mother’s hometown of Dolgeville, New York, in her earliest years before they moved to her father’s family farm on the banks of the Mississippi River in Missouri’s Pemiscot County when she was six years old. A few years later, the family moved to Caruthersville, Missouri, where her father established the BAYOU Canning factory, named for the combination of his last name and his wife’s maiden name. Later, Dixie’s father’s dreams relocated the family to Cape Girardeau, Missouri. Dixie was no child of the sun. She was fair-skinned with a sprinkling of freckles across her face. As a young girl, she could be found indoors reading a Nancy Drew Mystery. She frequented libraries, but on a Saturday afternoon, you could find her at the movies. At Lorimier Grade School, she was chosen by her teachers to receive The American Legion Award, celebrating American History. Her studious nature again surfaced when she achieved second place in her graduating class at Central High School. She attended college at Sophie Newcomb in New Orleans for two years and graduated from Southeast Missouri State University in Cape Girardeau, Missouri, in 1956. For graduation, her father gave her a trip to Europe and that started a life-long love of travel. Her first job after college was as a flight attendant for TWA. She was stationed in Queens, New York, where she met her first husband, August Blake Friscia. They married in 1957 and moved to Greenwich, Connecticut, where her daughter Anne was born in 1958. The family moved to Bedford, New York in 1963, and Dixie began her career of teaching, ending it at Somers Middle School, where she taught Social Studies for twenty-three years. She enlightened her students with her passion for history, politics, social justice. Once a year, she ordered Moon Pies from the south so New York kids could taste something she loved made in Missouri. During Dixie’s childhood, President Harry Truman visited Caruthersville. After Dixie shook hands with the president, she refused to wash her hands for days. Dixie’s husband Blake died in 1993. She retired in 1996 and moved to Cape Girardeau, Missouri for a brief period to be near her mother, Hildegarde Bader. She returned to Bedford and married the Honorable William F. Banks in November 1997. Dixie and Bill enjoyed many happy years together. Dixie moved to Santa Cruz, California, in 2011 to be near her daughter Anne for health reasons. She enjoyed almost nine years with Anne in the beautiful Monterey Bay area where she could hear the sea lions bellow from Anne’s house near the ocean. She is predeceased by her husband August Blake Friscia (1993), her husband, William Banks (2015), nephews Stuart Edwards (1959), Michael Jones (1994), Joseph Friscia (2000) and Christopher Edwards (2020). She is survived by her daughter Anne Brooks Friscia, of Santa Cruz, California, stepsons Chris (Colleen) Banks of Stamford, Connecticut, Peter Banks of Bedford Hills, New York, stepdaughters Barbara (Keith) Schwam of New York City and Helen (Romero) Iral of Yorktown, New York, sister Judith (Fowler) Jones of Fairway, Kansas, nephew Fowler (Jill) Jones of Prairie Village, Kansas, and niece Renee Friscia Devoe of Kansas City, Missouri. Services will be Thursday, February 13, 2020, at Clark and Associates Funeral Home, 4 Woods Bridge Road, Katonah, New York. Visitation will be 10 -12 pm, with the service immediately following. Interment will follow the service at Middle Patent Cemetery in Banksville, New York. In lieu of flowers, contributions may be made to Southeast Missouri State University, 1 University Plaza, Cape Girardeau, MO 63701, or the Somers Education Foundation, PO Box 401, Somers, NY 10589 in Dixie’s honor. Anne would like to give a special thanks to Sarah Chen, owner and Administrator of Maple House Assisted Living in Santa Cruz, and her staff members for the wonderful care they provided Dixie during her time there.