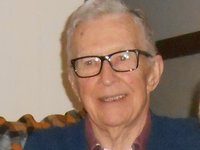 Bob was born on May 2nd 1930 in Flushing, NY to the late Solveig and Robert Vincent Holmes.

Bob went to high school in Queens NY.   Before the Army Bob was a stock clerk for Saks Fifth Ave

in NYC.  After the war Bob worked for Howard Holmes Volkswagen in Elmsford, NY.   He also worked

for Servisoft Company in Elmsford, NY.    Bob became the proprietor of Water Treatment Services in

Bedford Hills, NY for many years and retired in 1996.

and competed at the Harvey School Rink.  He enjoyed Jazz and had fond memories of seeing the

big bands in NYC in the late 1940's.   Bob was well loved by his neighbors and would socialize on his

daily walks throughout the neighborhood.

Bob is the beloved husband to recently deceased Violet M. Holmes.  They were married for 64 years

and residents of South Salem for 50 years.

Bob is the loving father of Robert Jr. (Nora) of Lakeville, CT, Nancy (Stephen) Doyle of Wappingers Falls, NY, Susan (David) Rotondi of Concord, NH.   He is the devoted grandfather also known as "Bubba" to Douglas, Connor, Liam, Kayla, and Alison.   Bob was preceded in death by a sister Carole Holmes.  Bob is the brother to Marjorie Wassmer

of Hawley, PA,  and is also survived by a nephew Daniel Wassmer.

Due to Covid a private memorial service is planned in July.   Memorial contributions may be made to Rock N' Rescue