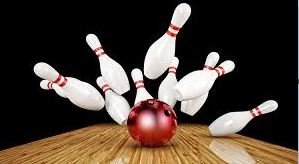 Florence Doris Brown Hipkins of Katonah, 91, avid bowler, NY sports fan and affectionately known by her neighbors as the Matriarch of Edgemont Road.

Doris passed away peacefully at home, she was 91.  Born April 9, 1929 in Mt Kisco to the late David and Florence Brown.  A graduate of Katonah High School 1946.  She led by example throughout Katonah’s downtown business district, urging patronage to all village merchants.  This led to a long career with Honebon’s Men Shop and dry cleaner.

Married in September of 1948 to Robert A. Hipkins Sr. from Kinsman, Ohio.  Becoming a wife and mother of three children, Bobby, David and Carol.  In addition to her culinary talent, as a working mom she provided a steady diet of stories and food for thought to discuss around the dinner table.

Being an astute New York sports fan in general, Doris acquired the skills to embark upon the world of competitive bowling, winning many tournaments.  A successful career which spanned decades across Westchester County and beyond.  Fondly known as Boom! Boom! by her peers and teammates.

A private family only service is being held on February 5, 2021 at Clark Associates Funeral Home.  Interment at Oakwood Cemetery, Mt Kisco, NY.

Share Your Memory of
Florence
Upload Your Memory View All Memories
Be the first to upload a memory!
Share A Memory