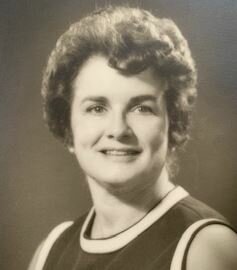 Margaret Merrick Barrett, 95, of Katonah, NY, died quietly on September 13, 2021.  She lived a mostly independent life while nurturing her family, beloved dogs and bountiful gardens.  She knew the Latin and English name for every perennial plant that adorned her lovely lakeside home.  Margaret devoured books, newspapers, crossword and acrostic puzzles.

Margaret was born on February 8, 1926 in Evanston, Illinois to the late Gertrude and George Clinton Merrick, a distinguished Alderman and attorney in Evanston.  Her four siblings, Nancy, George, Richard and Jane Merrick, predeceased her.

Margaret graduated Phi Beta Kappa from Smith College in 1947 with a B.A. in Classics that underpinned her lifelong love of languages.  In post-graduate French studies at Middlebury College, she met and later married Wallace Campbell Boyce.  The couple moved for his professorship at Colorado College and later divorced. Margaret then moved to Greenwich Village where she had always wanted to live.

Delving into NY life, Margaret worked in the Classics Department at New York University, studied Russian, and volunteered for the Village Independent Democrats.  She met and married William Barrett, renowned author and NYU Professor of Existential Philosophy.  After moving to Pleasantville in 1963, Margaret began her writing career, reporting on City Council, Zoning and School Board meetings for the Reporter Dispatch. She served on the School Board, and taught Latin at Pleasantville High School.  In 1982, Margaret moved to her Katonah lakeside home, indulged in her glorious garden, contributed plants and advice to many novice and expert gardeners, and in 1997 became the “garden tipster” columnist for the Patent Trader.  She sang in choirs at Pleasantville Methodist Church, Armonk’s St. Stephens Episcopal Church, and Bedford’s St. Matthew’s Church.  For years, she served as an election inspector, and volunteered at the South Salem Library and St. Matthew’s Church office.  An avid philanthropist, Margaret sponsored the Bedford Chamber Concerts, music and choir of St. Matthew’s, and contributed to many charities, particularly animal rescue, environmental protection, Native American and veteran causes. She supported women candidates enthusiastically.

Margaret is survived by her three children, Katharine Boyce Reeder, Campbell Boyce and Nell Barrett. She deeply loved her children and their spouses, her eight grandchildren, two great granddaughters and one great grandson, and her nieces and nephews.  She delighted in bestowing gifts on them at annual February family birthday celebrations and Christmases.  All will remember her superior intellect, droll wit, sometimes off-putting but always sage advice, and generosity.

A memorial service will be held at St. Matthew’s Church, 382 Cantitoe Street, Bedford, NY on Saturday, October 2, 2021, at 1:00 pm.  The family will celebrate Margaret’s life at Lake Katonah after the service.  Memorial contributions may be made to St. Matthew’s Church for plantings in memory of Margaret Barrett.

Share Your Memory of
Margaret
Upload Your Memory View All Memories
Be the first to upload a memory!
Share A Memory