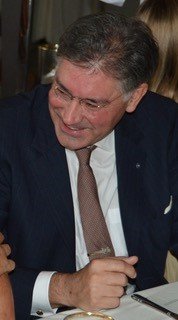 Robert Bruce Herber died at his home in North Salem on October 30, 2020.

Robert was born in Longmont, CO on January 25, 1955 to the late James and Mary Herber, née Giese. The family moved to Lake Forest, IL in 1961, where Robert excelled in school, achieved the rank of Eagle Scout, and served as an acolyte at the Episcopal Church of the Holy Spirit. In 1971, he spent a school year in Solingen, Germany as a Rotary exchange student. He remained close with his Rotarian host families in Germany for the remainder of his life.

He was a graduate of Lawrence University in Appleton, WI receiving his BA in German Literature and History in 1977.  On a rotary scholarship, he pursued studies in Post-War Europe and the Development of the Common Market at the Geschwister-Scholl-Institute for Political Sciences in Munich, Germany that same year.

Robert was the first foreign born trainee joining Deutsche Bank’s post-graduate Corporate Lending training program in Germany, the foundation for his career with the New York branches of four major German banks from 1983 until 2001. His father and grandfather had been bankers as well.

Following his years in banking, Robert free-lanced as a consultant to various retail and service businesses and dedicated himself to fundraising for St. James Episcopal Church in North Salem and Rotary clubs in Northern Westchester. He volunteered in the food pantry of the Community Center for Northern Westchester in Katonah, NY, the annual Clearwater Festival in Croton-on-Hudson, NY, and Rotary events like the Christmas Tree sale and the Taste of Ridgefield. He was a member and past president of the Rotary Clubs in Katonah, NY and Ridgefield, CT. On May 1st, 2020, Robert was awarded the Rotary Service Award for a Polio Free World by Mike McGovern, Rotary’s worldwide polio chair.

Robert is survived by his daughter Charlotte of Menlo Park, CA, his former wife Annette of Pound Ridge, NY, his sister Kathryn of Seattle, WA, his brothers Jon (Barbara) of Dallas, TX and William (Robin) of Chicago, IL, his nephew Henry, and his niece Alicia.

A memorial service for Robert will not take place at this time in consideration of those who would be prevented from attending due to pandemic related restrictions. Instead, memorial prayers will be offered for Robert at St. James Episcopal Church in North Salem on Sunday, November 22nd. Robert’s service will be conducted in the Spring when he will be interred in St. James’ Memorial Garden.

Contributions to honor Robert may be made to St. James Episcopal Church, 296 Titicus Road, North Salem, NY 10560, or The Ridgefield Rotary, P.O. Box 41, Ridgefield, CT 06877 for distributions to charities.