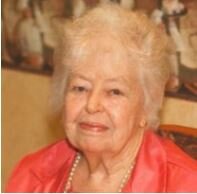 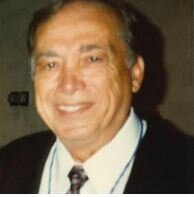 June Wagstaff Rutigliano, born on June 18,1926, the second oldest of eight children born to Arnold and Edith Wagstaff passed away on July 4, 2021. She attended Saint Gregory’s to 8th grade and then attended Our Lady of Mercy Catholic High School. Upon graduation, she was accepted and studied at the prestigious Pratt Institute in New York as an art major.
June went on to win first prize in statewide competition for her works in ceramics, sculpture and painting. Her paintings, mostly watercolors, adorn the walls of her home and those of family and friends.
On January 3, 1943, she met the love of her life at roller rink in Brooklyn, NY. She was 16 he was 17 and it was the beginning of a true and extraordinary love story. They were married on 9/7/1947. A love story that flourished for 72 years. Hours before his death, October 26, 2019, he raised his hand to June’s face and said, “I adore you”.

June is predeceased by her 7 siblings, Viola Kipling, Gerald, Thomas, Arnold, Leroy (Richard), Lawrence and William Wagstaff and a daughter Melinda Ann in 1975. She is survived by her son John, daughter JeanAnn, son-in-law Sal, four grandchildren, John, Michael, Zachary & Spencer and 3 great-grandchildren, Brooklyn, Vegas and a new baby boy due. There will be a Memorial Service at John Knox chapel in Orange City, Fla at 11:00am, Saturday, July 17, 2021.

William J. Rutigliano (Bill) was born in Brooklyn, N.Y on December 1, 1925 to Jack and Millie Rutigliano. He attended Brooklyn Tech high school, and at 18 joined the Army Air Corps because he wanted to serve his country before the war ended. He served in WWII as a top turret gunner on a b-24 and was proud to be a member of the 376th Heavy Bombardment Group, one of the most decorated Bomb Groups in WWII.

After the war, he returned to complete high school, attended St. John’s University, Brooklyn Law, and earned a bachelor’s degree at Marist College. He was a New York City Policeman for 10 years, then went to work for the Federal government and became an ATF (Alcohol Tobacco & Firearms) agent and supervisor of the White Plains office. He was an active member of the coast guard, while working for the government and at the time of his retirement was a Lieutenant Commander of Naval Intelligence.

He met June Wagstaff on January 3, 1943 and married the love of his life on September 7, 1947. They were happily married for 72 years. Hours before he died, he raised his hand to her face and said, “I adore you”. He was survived by his loving wife, June; his brother Pat; son, John; daughter JeanAnn; son-in-law Sal and their 4 grandchildren, John, Michael, Zachary and Spencer and two great-grandchildren, Brooklyn and Vegas. He was pre-deceased by a daughter, Melinda Ann in 1975.

The family will receive friends on Saturday, October 16, 2021 from 10:00 am to 11:00 am at Clark Associates Funeral Home, 4 Woods Bridge Road, Katonah, NY.  The Memorial Service will be celebrated at the Funeral Home at 10:45 am.  Interment will follow at St. Joseph's Cemetery, Route 202, Somers, NY.

Share Your Memory of
June & Willam
Upload Your Memory View All Memories
Be the first to upload a memory!
Share A Memory