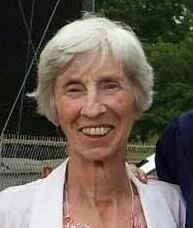 Frances McLoughlin, age 85, died peacefully on December 26th 2021. Formerly of the Bronx and Tuckahoe, Fran was the fifth daughter of Hannah and John “Joe” Cloonan. She is predeceased by her sisters, Marcella, Virginia and Laurette. She is survived by her husband of 60 years, Gerard, her sister Claire Fallon, her 6 children and their spouses: Deirdre and Joseph Reich, Christopher and Toni, Peter and Lisa, Patricia and James O’Donnell, Karen and Ted Sorlien and Gerard Jr, and Mary Beth; 20 grandchildren: Shane, Colleen and Lindsey Reich, Ryan and Jason McLoughlin, Brendan (Lindsey), Colin (Elise), Devin and Quinlan McLoughlin, Megan, Erin, Kevin and Kelly O’Donnell, Hannah Jane, Sarah and Kai Sorlien and Aidan, Kathleen, Molly and Gerard McLoughlin III; and 1 great grandchild, Nathan Liam McLoughlin. “Aunt Francie” is also survived by several nieces and nephews.

Frances attended Marymount Manhattan College where she made many lifelong friends. She married Gerard in 1961 and over the next 40 years, they lived and raised their children in Tuckahoe, NY. Frances was a well loved and respected member of the small town’s community, singing in the church choir, acting in the community theater, and being elected to the school district’s board of education. She often volunteered her time with Meals on Wheels. She enjoyed gardening, playing tennis and bridge, and spending time with the “Marymount girls”. When her children were older, Frances went back to work as an intake officer for the Westchester County District Attorney’s office. For 20 years, “Miss Fran” as she was affectionately known, put her heart and soul into helping victims of domestic violence.

Gerard and Frances enjoyed traveling, attending Broadway shows and concerts.  In 2005, they moved to Somers, NY where Frances was a member and eventual president of the League of Women Voters. She continued playing tennis and spent many afternoons reading and doing the New York Times crossword puzzles with Gerard.

Frances will be missed by many but her family is sure she is whistling, singing and dancing with loved ones that passed before her.

Friends are invited to calling hours at Clark Associates Funeral Home, Katonah, NY on Wednesday, January 12, 2022 from 3-7 pm. A mass of Christian Burial will be celebrated at St. Joseph’s Church, Somers, NY on Thursday, January 13, 2022 at 10:00 am.

In lieu of flowers, donations may be made to the Maryknoll Sisters, 10 Pinesbridge Rd, Ossining, NY 10562.

Share Your Memory of
Frances
Upload Your Memory View All Memories
Be the first to upload a memory!
Share A Memory