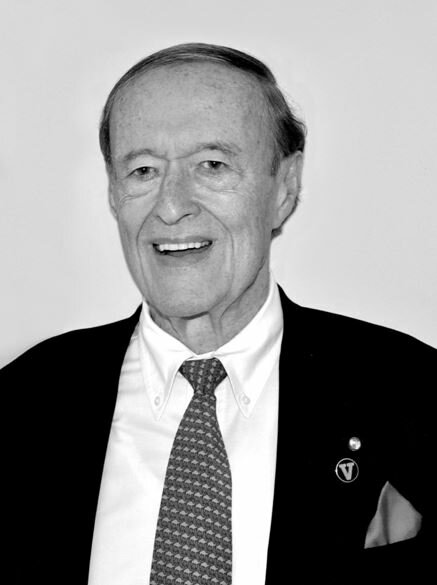 STRATON, JR—John C., a longtime resident of Tuxedo Park, NY and Katonah, NY, died peacefully December 21st at 89, after a brief illness, with his beloved wife Donna De Coursey by his side.  The son of John C. Straton, Sr. and Helen Sanford Straton, he was born and raised in Warwick, NY.  After graduation with honors from The Peddie School, he moved on to Charlottesville, where he began a life-long romance with the University of Virginia.  A 1954 graduate, John was a joiner and a leader—Glee Club, ROTC, Skull and Keys (honor society), Sigma Phi Epsilon (President), and the Cavalier Daily (Business Manager.). Throughout John’s life, he served his community and God and Country honorably.  He attained the rank of U.S. Army, Major (ret.) during the Korean War.  He was a Vestryman at St. Mary’s Episcopal Church in Tuxedo Park and was the Village Tax Assessor.  At the time of his death, he was a member of the UVA Club of New York (past President), the Yale Club of NYC, Military Order of Foreign Wars (past NY Commander and Treasurer), Pilgrims of the United States, the Tuxedo Club, and the Coral Beach Club.  A stockbroker for 60 years, John worked tirelessly for his clients as Senior Vice President of Investments at Morgan Stanley and its many predecessor firms, beginning his career as a General Partner at Jas. H. Oliphant and Co.  His retirement just before his 85th birthday allowed even more time for extended global journeys with Donna.  Exotic travel had become their passion, whether on safari or aboard Sea Cloud.  Bermuda, however, remained their favorite destination.  Tall and handsome, John commanded a distinctive presence at Coral Beach Club in his Bermuda shorts, knee socks, and classic pink jacket.  He is also survived by three children from previous marriages:  John C. Straton, III (Jann); Sara S. Straton (Dave); Ashley H. Straton; two granddaughters, Nicea Rose Straton-Shea and Teal Grace Straton-Shea; and a sister, Carol S. Le Brecht.  His parents and a brother, Sanford, predeceased him.  In addition, he leaves behind many adoring cousins, nieces, and nephews, and countless friends, colleagues, and classmates, who will celebrate a life well-lived and well-loved.  Memorial services will be held in the Spring.  Contributions may be made in John’s memory to:  University of Virginia, “Cavalier Daily donate” online or by phone, 434-243-9060 (Melissa Gormes); or The Peddie School, Mary Mahoney, Fund Director, 609-944-7521.