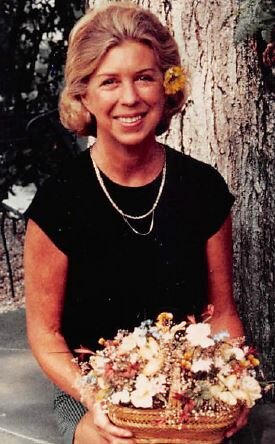 Kate deForest Johnson (known to her friends as “Chickie”) passed away peacefully on April 1st, 2022 at the age of 97.  Chickie grew up in New York City and attended the Brearley School before going to Garrison Forest School in Maryland. She met her future husband, Broaddus Johnson, Jr. (“Speed”) while working at the advertising agency Young & Rubicam. They were married in 1949, and within a few years, moved to Bedford, New York to raise their family.

Chickie was kind-spirited, artistic, and competitive.  She made people laugh through her playful sense of humor.  She enjoyed painting, tennis, golf, and sunshine. She also loved spending summers in Onteora Park in the Northern Catskills with family and friends. After raising three children, Chickie followed her artistic bent and went back to school to study at Parsons School of Design. Soon thereafter she started a successful interior design firm in Bedford. Chickie is survived by her loving children, W. Macy Johnson, Andrew B. Johnson III, Kate J. Phillips; by seven grandchildren, Eliza Hughes, Whitney Ralli, Charlotte Jones, Andrew Johnson IV, Luke Johnson, Peter Phillips, and Piper Phillips; and by six great grandchildren.

Services will be held at St. Matthew’s Episcopal Church in Bedford, New York on April 23, 2022, at 11:00 a.m., followed by a reception in the Parish House at the Church.

In lieu of flowers, contributions may be made to St. Matthew’s Episcopal Church or to Northern Westchester Hospital Center Foundation Inc.

Share Your Memory of
Kate
Upload Your Memory View All Memories
Be the first to upload a memory!
Share A Memory