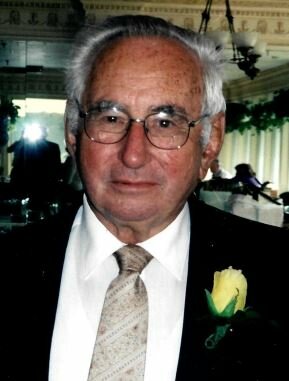 Julius was born on October 11, 1921 to Julius and Anna Heller in Perth Amboy, NJ.  He was a graduate of Cooper Union in New York City.

Julius worked for Turner Construction Company until his retirement in 1986 and then worked part time for Mt Hope Cemetery in Hastings-on-Hudson.

A longtime parishioner of St. Nicholas of Myra, Julius was also a member of their   Building Committee.

On October 4, 1952, he married Helen Sabol in St. Bartholomew’s Church in Yonkers NY.

Survivors include one daughter, Elaine Cottle (Donald) of Hopewell Junction NY and three sons, Paul (Shirley) of Duluth MN, Michael (Cindy) of Auburn WA, and Stephen (Lilian) of Gt. Barrington, MA.  Julius is the brother of Josephine Dwyer of Hopewell Junction, NY.   He is also survived by nine grandchildren and ten great grandchildren.  He was predeceased by his beloved wife Helen and sister Anne.

Visitation will be at Clark Associates Funeral Home in Katonah, NY from 5pm to 8pm on Wednesday, August 31, 2022.  A Parastas will be held at 7pm.

Divine Liturgy will be celebrated on Thursday September 1, 2022 at 10:30am at St. Nicholas of Myra Byzantine Catholic Church in White Plains NY.  Interment will follow at Oakland Cemetery in Yonkers NY.

Contributions in his memory may be made to St. Nicholas of Myra, 768 North Street, White Plains, NY 10605 or Hospice of Westchester and Putnam.

Share Your Memory of
Julius
Upload Your Memory View All Memories
Be the first to upload a memory!
Share A Memory