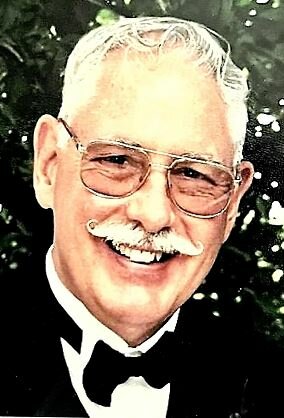 David John Krumlauf of Katonah, New York, died peacefully surrounded by his family on Sunday, September 25th at Regional Hospice in Danbury, CT.  He was 87.

Besides his wife of 58 years, Marion (Bartling) Krumlauf, he is survived by a daughter, Karen Craybas and her husband Robert of Newtown, CT, a son, David J. Krumlauf, Jr. and his wife Julia of Greenwich, CT, and 5 grandchildren.

After graduating from Roosevelt High School in Yonkers, NY in 1952, he enlisted in the Navy serving most of the time in the Far East in waters around Korea, Indochina and later Vietnam.  He had 8 years broken service in the Navy attending Roanoke College in Salem, VA between enlistments.  He then joined the Reserves and retired as a W-4 Warrant Officer 22 years later with 30 years total service.

After leaving active duty in 1963, he was employed by the Westchester County Department of Public Works in their Engineering Division.  He then served in DPW’s Building Division as Deputy Superintendent of Buildings, after which he served as General Superintendent of Playland Park under the Playland Commission until 1980.  He then became Director of Facilities at Westchester Community College and remained there until his retirement in 1998.

David was an active member of the Lutheran Church of the Resurrection in Mt. Kisco, NY, serving on its Council for many years, becoming Council President in 1995.  He also served on the Board of the USS Mahan Association, was a 70 year member of the American Legion, and served over 22 years as a Fire Commissioner in the Katonah Fire District.  In the 1970s and 1980s he served as President of the Katonah Memorial Park Assn. and was a member of the Bedford Parks Recreation & Advisory Board, becoming its chairman in 1979.

After retirement he spent several years building a very detailed model railroad in his basement in Katonah.  He also enjoyed wintering over in Florida with his wife at their home in Delray Beach.

A Memorial Service will be held at the Lutheran Church of the Resurrection, Mt. Kisco, NY on Saturday, October 8th at 11 am.