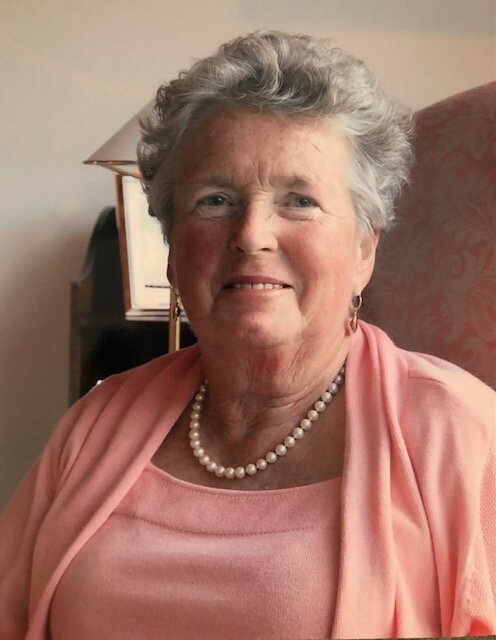 Libby was born December 6, 1938, in the village of Cookham, England, to Freda and Reginald Sharman Wright. She was the beloved wife of Thomas Jeremy "Bob" Bristow and loving mother of Sue (Bob) Bronico of Bedford Hills, NY, and Mary Bristow of Mission Hills, Kansas. Sister to Penny (Peter) Brading; devoted Grandmother to Matthew, Daniel, Elsa, Nicholas, Sabrina and Matilda, and aunt and cousin to many.

Growing up in England, her life was irrevocably changed in 1949 when she was one of the first children to survive TB meningitis, at Guy's Hospital, London, thanks to the then new drug Streptomycin. Her determination to recover remained with her as she dealt with the life-altering effects of this illness in the long and fulfilled life that followed.

June 24,1961, Libby married Bob, the love of her life at Holy Trinity Church, Cookham. They were devoted to each other, and though in failing health, recently celebrated their 60th wedding anniversary. Early years she took great pride in being a homemaker, raising her family first in England and in Belvedere, California, after their move there in 1978.

She also volunteered for several years as a 'Pink Lady' at Marin General Hospital, a calling she had followed in her early twenties when working as a nursing auxiliary at the King Edward VII Hospital in Windsor, England.

Though proudly in the late 1990s becoming an American citizen, she never relinquished her love for England. An ardent follower of the British Royal Family and a member of the society 'The Daughters of the British Empire', she hosted many events and made a point each Christmas of tuning in to the Queen's annual broadcast to the nation.

Over the years she took great care to remain connected to all her friends and will be remembered for her passion for knitting, love of anything red, taste for chocolate, and of course a good cup of English tea!

In later years, along with traveling to many wonderful countries, Libby and Bob moved to Katonah, NY.

Her six grandchildren brought much joy and as her earlier life illness slowed her down, she took immense pride in watching her grandchildren run in her garden, teaching them to knit, and reciting humorous poems and sayings from her youth.

Libby was a woman of great faith, and in lieu of flowers the family is asking those wishing to make a donation in her name to do so to either St Luke's Church, Somers www.episcopalchurch.org or

A celebration in memory of her life will be held at St Luke's Episcopal Church in Somers, NY, on Monday August 30th at 2pm.

Share Your Memory of
Elizabeth
Upload Your Memory View All Memories
Be the first to upload a memory!
Share A Memory